VPNs are being used on regular basis, which really isn’t much of a surprise especially taking into consideration how much utility they offer. They offer privacy, security, access to region locked content, streaming services, torrent sites and so much more. A ton of VPNs had been made available on both Windows 7 and Windows 8. 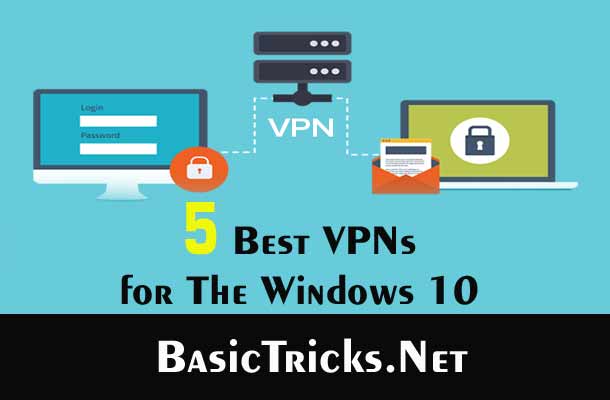 However, now that majority of people have migrated to Windows 10, new versions are being created for it as well. Although, the presence of VPN is low on the latest operating system, there are still some amazing tools available on the platform.

Following is the list of five best Windows 10 VPNs that you can get your hands on right now.

First on the list is FalcoVPN Windows 10 VPN, and the reason we have put it at the top of the list is that of its free nature. Most of the VPNs you come across offer free trials, but in order to make use of their features, you have to get the paid subscriptions. However, that is not the case with FalcoVPN as you are given unlimited access to a server. This means there will be no bandwidth limitation of any kind. This is ideal for people who access VPN on daily basis but do not want to pay for the subscriptions. On top of this great deal, this VPN provides more than four security protocols, and it protects your privacy as well. So, for paying literally nothing, you will be able to enjoy all the VPN features with FalcoVPN.

NordVPN has become quite popular lately and that’s largely due to its amazing service and cheap price tag. It offers a couple of security protocols and privacy, but its main objective is to allow seamless torrenting. If you are a victim of internet throttling and are unable to download any torrent whatsoever, then you can seek help from NordVPN. It provides you with proxy servers, which you can use to gain access to torrents. As soon as you put in the settings provided by this solution into your torrent client, your download speed would go back to normal. As mentioned above, it includes other VPN features as well, but its main focus is to counter internet throttling. If that is your concern, then you should definitely go for NordVPN.

TunnelBear VPN can be used for a long time for free, depending on your usage. If you just want the basic features like accessing blocked content, then TunnelBear is a perfect free solution for that. However, if you are looking to get other features as well, then you will need to get any of the paid plans. The best part about this app is that its cartoonish user interface is quite easy to understand. The company integrated cartoon bear into their app, and that bear visually explains everything. So even if you are not familiar with some of the features, you will still be able to understand what they can do by just looking at the visual representation. This has been a great addition and helps out people who are not tech savvy. If you lack tech or VPN knowledge in general but still want to make use of VPNs, then TunnelBear VPN is your best bet.

Vypr VPN is quite popular amongst its users because this VPN service has literally earned its popularity. Vypr VPN offers first party servers, which means that no data would be transferred to third-party and everything that you do on it will remain in a single jurisdiction. On Windows 10, Vypr is the only VPN available with first party servers, and if you crave privacy and don’t want your information to get in the wrong hands, then this is as trustworthy as you are going to get. Security and unblocking features are present as well, but the main reason people use Vypr VPN is that of the privacy offered by its first party servers.

ExpressVPN needs no introduction. It has been around since the beginning and offers every feature one can ask for. The best part about this app is that there is no downside to it. All of the VPN related features are top-notch and work perfectly. If there is one thing that can be stated as a downside then it has to be its price. It is one of the expensive VPNs, but that is the price you have to pay for perfection. For users that want to utilize each and every feature that a VPN has to offer, ExpressVPN is their best option. It is expensive, but it offers everything you need from a VPN. A complete package like this one deserves the full price.

So these are the best 5 vpn for windows 10. which you can use right now. Follow us for more awesome tutorials.