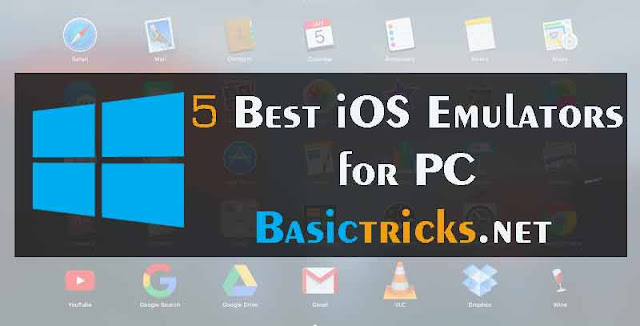 As we all know the Apple store has a huge collection of awesome apps but only iOS Devices users can use them. So today in this article I’m going to show you the best Emulators to Play iOS games on PC. We all know that many people play or run Android Apps on their windows pc using Android Emulators. In the same way, we are also going to Use the Emulators to Play iOS Games on PC.

They are many iOS Emulators in the market but choosing the best one is our choice. Our Basictricks Team has collected the Top 5 Best iOS/iPhone/iPad Emulators for PC. Each and every Emulator in the collection is the best and better option which we can recommend for our users. The top 5 Emulators are as follows.
These are the top most rated Emulators for PC. We are going to discuss each one of them below.

iPadian is the Best iPhone Emulator for Windows PC among the other 4 Emulators. You can download the iPadian now without any second thought. iPadian is available with two versions. One is Free and the other is Paid version of $10. You can notice a slight difference in both versions. As we all know the paid version has some more additional features than the normal free version.

If you don’t want to invest then you can simply use the free version to enjoy the feel of using an ios device. If you are ready to buy the iPadian paid version then it is totally worth every penny. Because you can download and use an unlimited number of apps. I have personally used both the versions and both are awesome.  They will be no issues with the free version too. iPadian is a best iPhone / iPad Emulator for pc.

How to Install iPadian on your Windows PC:

Once you successfully installed iPadian Emulator on windows pc. You can proceed with the below steps to run or Play ios games on pc.
This is How simple to use iPadian iOS Emulator on pc.

MobiOne Studio is another Best iPhone/iPad Emulators for windows pc. You can download and run any iOS app on your PC with few clicks. This is a developing cross-platform mobile app for android and ios. Moreover, this emulator allows you to download both the ios and android apps on your pc. You can enjoy iOS Apps & Android Apps on this emulator without any problem.

All the apps are built on HTML 5 which you can run anywhere and also it supported on all devices. You can customize all the app icons and also check the status of the apps which you can simply download from the MobiOne studio. MobiOne Studio is not Free but you can enjoy the 15 Days trail.
Note: MobiOne Studio has officially Stopped iPhone Emulator. But you can download the Previous version from the below link and enjoy using it.

As I said above MobiOne Studio has Stopped iPhone Emulator. But we can Download the previous version using an .EXE file and run it on your Windows PC.

Download MobiOne Studio
That’s it!!! This is how we should download and install MobiOne Studio on your windows pc. Click on the icon and start using it.

Air iPhone Emulator is another best ios emulators in the list. You can enjoy any ios app for free by downloading them from the store. Air iPhone built a virtual iPhone on your Windows pc. You can see the real screen same as iPhone by installing Air iPhone. This is a Free iOS Emulator for Windows PC with supports Adobe AIR Framework.

There are some of the pre-installed apps in this Emulator which makes you feel that you are using an iPhone. If you don’t like the iPadian Emulator (Especially Free Version) then this Air iPhone would be the Best Alternative of iPadian.

Download Air iPhone
This is how the installation process of Air iPhone on windows PC is done.

You can also track the status and major concerns of the app. iPhone Simulator also has some great features like Quality Graphics, Test Clock, Calculator, etc. iPhone simulator is available for free. Download iPhone Simulator and enjoy using it.

Appetize.io is a best Online iOS Emulator. You can Access an unlimited number of apps and run ios apps. Moreover, not only ios apps it can run android apps too. With this emulator, you can develop iOS & Android Apps on your Cloud Storage Service. This Emulator is an alternative of App.io. BTW Appetize.io is also a better choice.

You can run ios and android apps on your windows pc using Appetize.io. You can even test your apps which are in testing level or starting stage. This Emulator is free for first 100 minutes and after that, it will charge $0.05 per minute.  There will be no installation required as this is an Online Tool.
So these are Top 5 Best iOS Emulators for Windows PC. Check each and everything according to the given steps

Finally, The complete list of Best 5 Most Rated iOS Emulators for PC has been revealed above along with the detailed description of emulators and their installation steps. If you face any problem in installation or using it. Feel free to Comment the problem we will try to solve it. Stay Tunned to Basictricks for more awesome detailed guides.
Tweet Pin It